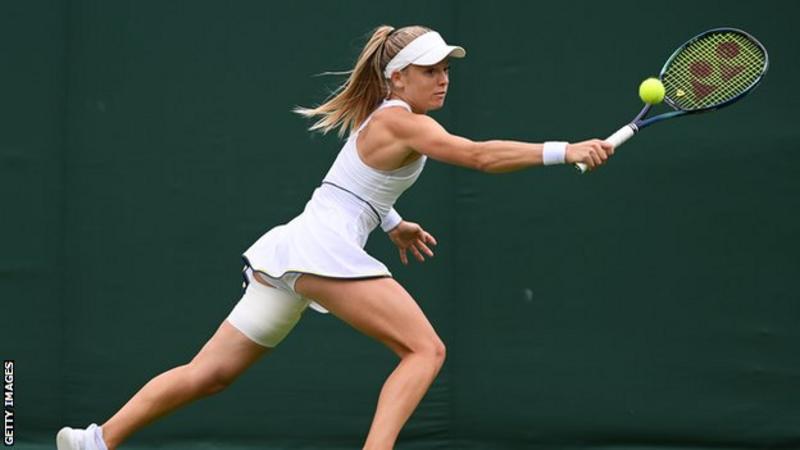 Katie Swan believes recent performances show she has the level to compete with top players, despite being knocked out of Wimbledon in the first round.

Bristolian Swan, ranked 210th in the world, was competing in her fifth Wimbledon.

The 23-year-old progressed to the second round in her home grand slam once before, in 2018.

“I think the last few weeks especially has shown me I really have the level to keep pushing on and I’ve got some big goals and I’m just looking forward to what’s coming,” Swan told BBC Radio Bristol.

In the weeks before Wimbledon, Swan beat top-50 player Sloane Stephens in the Bad Homburg Open first round, a result she said gave her confidence, while in February she won the W25 Santa Domingo – part of the ITF Women’s World Tennis Tour.

“Not just Wimbledon but a couple of weeks of grass tournaments that I was able to play I put in some good performances and was able to show that my game matched up with these top 100 players. I had a top 50 win as well, which was great,” she added.

“I think that match [against Kostyuk] was on my racquet to win. Unfortunately I didn’t come through but I learnt a lot from the match, I’ve been through it with my team quite a lot just taking the positives and things to improve and I really feel like it’s put me in a good place to continue for the rest of the year.”

A new base and new team
Swan moved to the USA from Bristol with her family when she was a child and until recently was based in Wichita, Kansas.

However, in November she moved back to London where she now bases her training with a newly built team around her. The change has refreshed her career.

“It’s not been an easy pro life for me, there’s been a lot of ups and downs for different reasons, a lot of injuries and stop-start,” she added.

“But I feel like in the last six months even just kind of creating my own team and programme around me, moving away from my parents, it’s a big commitment and I think just doing that has put me in a good place mentally.

“Just knowing that I’m taking control and ownership of my career.”

Listen: BBC Radio Bristol – The Sports Store, featuring Katie Swan
Swan remains under the tutelage of long-term coach Julien Picot and said the two have been spending a lot of time talking about “psychology”. However, she now also works with former-British pro Alex Ward, while another coach oversees her programme.

Improving her endurance and the ability to back up a good result with another at major tournaments is Swan’s main goal in the hope of ultimately building on her world ranking.

“I think the biggest goal for me is just staying on court longer, being able to sustain physically day-in day-out and playing matches back-to-back-to-back,” Swan said.

“I think I’ve shown quite a lot that I can compete at that level, it’s more sustaining it and physically being able to do it after a tough match, being able to wake up and do the same thing the next day with the goal of making it all the way to the end of the tournament.”

Swan’s next goal is the US Open and she is hoping to play a couple of events later this summer in the lead-up to the grand slam, which starts on 29 August.

She is also aiming for a spot in Great Britain’s team for the Billie Jean Cup finals – formerly the Fed Cup – which takes place in Glasgow this November.

Despite losing to the Czech Republic in qualifying, Great Britain’s women’s team were guaranteed a wildcard spot in the tournament as hosts.

“I hope to be in the team but I also know that I have work to do if i want to be there playing in that team,” Swan continued.

“I feel like there’s a lot of depth right now for girls in British tennis – whoever ends up being in the team it will be a great experience to play at home in that kind of event.”

Swan pointed to the depth of talent currently within the British women’s scene, spearheaded by the success of Emma Raducanu at last year’s US Open. Raducanu’s performances, Swan said, have helped instil more of a belief in the team that you can beat anyone.

“What Emma achieved last year was incredible. The fact that she was able to do that, it really inspired a lot of us and made us believe that something like that was possible,” she said.

“The grass season always seems to be a time where everyone always enjoys themselves, likes playing in front of a home crowd and kind of all spurring each other on.

“We all train together as well so if you see one of your mates that you train with start doing well in an event you start to believe if they’re doing it why can’t I do that as well. It’s like a snowball effect.”